Since this is 20 years project (or equal to about 1000 weeks project, 1045 to be exact)…this week marks the 1% completion of the journey, time wise….and another 99% to complete.

Not a good week for me…the bad news, the cough, fever, flu…most of the time I just sleeping…need to see the doctor again this Monday and maybe asked for a stronger cough medicine. Need to get well before Kasugi! Go Terengganu Go! :)

Toying with the idea of entering KLCA’s International tournament this September but later find out that my colleague had taken the leave on that time…hmm. 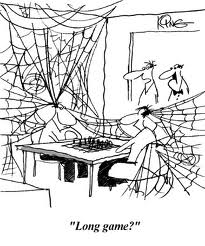 Cartoon of Jerry King.
Posted by Ilham at 8:55 AM 4 comments:

A quiet one… My mind is already looking forward to Kasugi…it sure bring back memories of Merdeka tournament in 90s…minus Ghalam, pocket money and a colourful windbreaker! 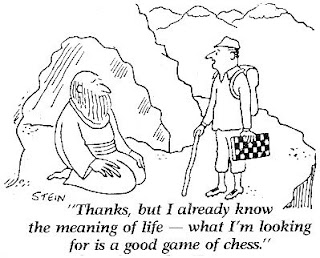 Image from www.chess.com
Posted by Ilham at 11:21 PM No comments:

Took part in Insofar, seeded 12, finished at number 12. I wrote down my moves until I was down with 5 minutes (maybe next time I should stop writing at 10 minutes) resulting in many winning position ended with a draw.
I drew my first 3 games before lost to Yatz (Yatz, my  knight sac is correct, the continuation is wrong) and won the last 3 games…4.5 out of 7.

Spend most of the week analysing my Insofar games with conclusion I am still weak at tactics.

Jax Tham mentioned about interesting magazine, NIC, that is very helpful but I agreed with Chin Seng…maybe it is far too advance for an amateur 2000 player.
To my surprise many players actually read this spin off blog, some are young kid…so I guess I need to be careful with what I write...

Others
My comment on Steve Giddin’s article was published at Chessbase! :)

Middlegame
My games at Insofar

Image from www.naughtyfake.com
Posted by Ilham at 2:26 AM No comments:

Plan to take part in Insofar Tournament tomorrow. For tomorrow tournament my aims are as below:
1. To write down all my moves on my new chess score book.
2. To finish better than my initial seeding.
3. To have fun!

This week is quite a hectic week for me and as such only able to spent little time studying chess (well, playing many games at chesscube is a contributing factor too)

Moro is leading Tal Memorial and Naka is catching up. Hope I could see 1,2 finishing in them! 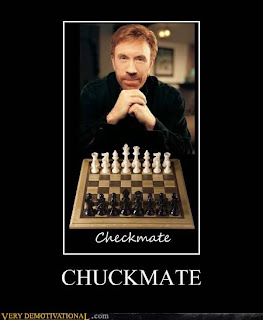 Image from www.verydemotivational.com
Posted by Ilham at 6:53 AM 2 comments:

Mr Logic, Chess Ninja, hinted on one blog about inspiring OZ chess players in search for GM title…make me notice…hey, I am yet to have Blogs I Followed here. So here it goes…few blogs that I followed. Yes, Ninja…a good blog there with lots of stories and games and humour too! Thanks mate.

Hairulov and John Wong gave their opinion about My System and Modern Chess Strategy which I generally find it useful. Thanks, Bro for the comments. OK, as at now I will not touch Modern Chess Strategy…I will only buy/read it after I have finished My System…and here lies the problem…so far I only finished a chapter of the book. I found reading and studying chess from netbook is not as smooth/effective as from a real book…hmm, maybe I should print it…there goes Ilham the Green Peace guy.

Played few blitz games (ok, LOTS of games actually) at chesscube and was surprised to win many games positionally and suddenly my rating is like 2100, I know I am improving (perasan)... but this fast? Just when I thought should my rating cross 2200, I will call Gilachess and demanded my name to be included on the Olympiad poll…I lost few games and my rating drop to 1900.

TAL Memorial! Time is perfect! Players are perfect! Games are perfect! (so far) even the draw lot ceremony is also perfect…I am rooting for Naka or Moro to win this tournament. Used to support Carlsen but after his boycott of World Chess Champion under reason that I no longer remember …no longer his fan. 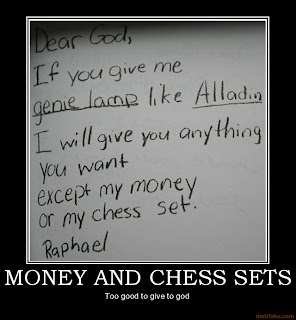 Bought two chess books this week (must be influence by Peter Long’s advice on studying tactic) Nunn’s Understanding Chess: Move by Move and Dvoretsky’s Secrets of Chess Tactics. Well, at this rate of buying chess books (compare with finishing it, I think chances of me being a chess librarian is greater than being a chess grandmaster!)

Saprin mentioned about book that refuted My System titled Secrets of Modern Chess Strategy by John Watson…I know Mok got this book (for sale). I am split here…should I get it or shouldn’t i. Since I have not yet finished My System, I am afraid this book will be too advanced for me. By the way on Understanding Chess’ introduction, John Nunn did mention on how Secrets of Modern Chess Strategy had influence him…Help!

A bit changes on Weekly Report. I will no longer put my plan for the week. Lazy is one thing but I don’t want to be tied up with my plan, so I guess no plan will gave me more freedom to do (or not to do :))anything that suit my mood…whatever, Ilham.

Ah yes, Anand won World Chess Championship again. I have the opportunity to follow the game live at DATCC with Live free commentary from IM Mok (Thanks Mok)! Mok can be seen concluding his animated analysis with “…drawlah. Don’t know why they still playing…Cannot do anything already”…Najib who seated next to Mok can be seen deep in thought trying to digest Mok’s commentary.

A few people asked me whether I will be able to join their team at Kasugi’s. Thanks, but I have already got my own team.

I am unable to take part in Lim Chong’s Memorial today since I am away on family trip.

I did not finished My System: Chapter 2 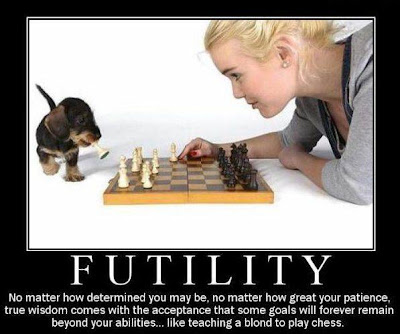 Image from www.motivationals.org
Posted by Ilham at 4:40 PM 3 comments:

Received Master of Planning-Nimzowitch from John Wong…thank you very much, you have been very supportive!

Comment from Peter Long on studying standard opening makes me think…maybe I should study opening. For a start not specific line memorisation, the way I used to study opening before, but more of understanding theme…so, maybe starting from Week 6 onwards, I will start studying opening…play against/with isolated queen pawn, minority attack, queenside pawn majority etc.


Middlegame
Finished
My System:Chapter 1: The Element…I love his comment to describe chess strategy i.e. intermezzo=Russian peasant…5-6 children born out of wedlock! Or on passed pawn=…so we either condemn the criminal to death (captured) or to a life sentence in prison(blockade/keep in check)
Chess Fundamentals. Chapter 2: Further Principle in Endgame Play.
Chess Strategy. Chapter 3: Thought Process and line of thinking…maximise your pieces.


Endgame
Finished R vs B (FCE) and covered R vs pawn (via UCE and FCE). 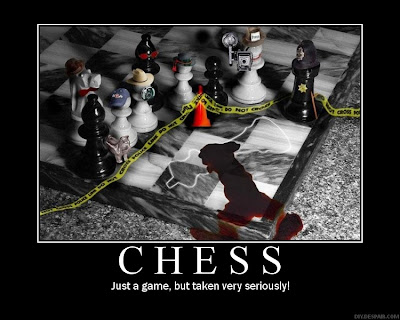 Image from cr1mson-king.devianart.com
Posted by Ilham at 9:10 PM 1 comment: